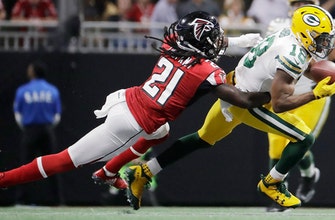 ATLANTA (AP) Desmond Trufant walked off the field with a game ball.

He wasn’t about to let it go.

After missing much of last season with a shoulder injury, including the Atlanta Falcons’ run to the Super Bowl, Trufant is healthy again and playing a big role for a young, aggressive defense.

Trufant had two huge plays Sunday night that helped send the Falcons to a 34-23 victory over the Green Bay Packers in a rematch of last season’s NFC championship game.

In the closing seconds of the first half, the cornerback picked off an errant pass from Aaron Rodgers that set up a touchdown. Then, in the opening minute of the second half, Trufant alertly scooped up what appeared to be an incomplete pass and returned it for another score.

Trufant’s performance, in the first regular-season game at new Mercedes-Benz Stadium, was especially poignant given what he lost out on a season ago . He went down with a season-ending injury in the ninth game, missing out on a run to the NFC South title, a 44-21 rout of the Packers for the conference title, and that excruciating loss to the New England Patriots in the Super Bowl, when the Falcons squandered a 25-point lead in the second half.

”What a night for him,” coach Dan Quinn said. ”That’s one to remember, for sure.”

The Packers trailed 17-7 and were backed up on their own 3 when Rodgers lofted a pass down the right sideline, hoping to hook up with Geronimo Allison. It never had a chance.

Trufant had Allison blanketed, the pass was a bit overthrown, and the Atlanta player was the one who made a tumbling grab at the 36 with 47 seconds remaining before halftime. The Falcons took advantage of the turnover, driving quickly for Matt Ryan’s 3-yard touchdown pass to Tevin Coleman that stretched the lead to 24-7 at the break.

On the second play of the third quarter, Trufant turned the game into a rout.

Vic Beasley Jr. set up the defensive score, plastering Rodgers as he attempted to throw. The ball wobbled out sideways and hit the turf, and the most everyone reacted like the play was over. Not Trufant, who picked it up and high-stepped 15 yards to the end zone .

The officials signaled touchdown, then went to a video review. The call stood when the replay showed the ball landing just inside the 16, roughly the same spot Rodgers threw it from. That made it a fumble rather than an incomplete pass.

”Vic got the ball out and made a hell of a play,” Trufant said. ”The coaches always tell us to scoop and score no matter what. I just picked it up and went back to running back mode.”

With those two plays, Trufant changed the complexion of the game.

”A big play by him with the interception at the end of the half, then a smart play to start the second half on the forced fumble,” Quinn said. ”You’ve got to scoop it up and take it back. That was his awareness. What a great way to have him back with that type of performance.”

The 313: Welcome to Traverse City (VIDEO)

Arians returns to Indy: 'I've always had a...

Mickelson, Bradley working their way back to better...