Home Sports Bradford out for Vikings, Keenum steps in at Pittsburgh
Sports

Bradford out for Vikings, Keenum steps in at Pittsburgh 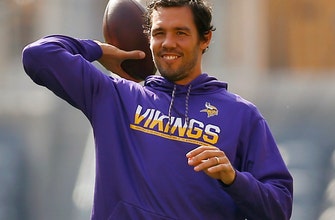 The Vikings have made Sam Bradford inactive early Sunday, meaning Case Keenum will get the start at quarterback for Minnesota at Pittsburgh.

Bradford played spectacularly in a Week 1 victory over New Orleans but injured the knee during the game and was limited in practice all week.

Keenum will make his first start for Minnesota after signing as a free agent in March. Keenum is 9-15 as a starter in his career during stints with Houston and the Rams.

The Steelers will be without defensive end Stephon Tuitt, who injured his left bicep last week against Cleveland.

Cubs' Lackey on ump: 'He missed the pitch'

The 313: Welcome to Traverse City (VIDEO)