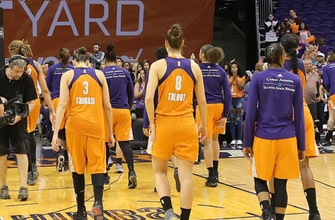 PHOENIX — Candace Parker hobbled into the postgame press conference with ice bags over both knees and slung over her left shoulder. But soreness was a small price to pay for a return trip to the WNBA Finals.

Parker drove for a layup with 2.9 seconds to play, giving the Los Angeles Sparks an 89-87 win and three-game sweep of the Phoenix Mercury in the WNBA semifinals Sunday.

Parker, a two-time league Most Valuable Player, finished with 21 points and 11 assists.

The Mercury’s Brittney Griner missed a shot as time expired and the Sparks celebrated with shouts and embraces in front of their bench.

“In Sparks fashion, we made things interesting down the stretch,” Parker said. “They jumped, and I just saw the lane and took it to the basket.”

Odyssey Sims scored 22 points on 9-of-12 shooting, tying a playoff career high. Chelsea Gray added 14 points for the defending champion Sparks, who advanced to their second straight WNBA Finals and fifth overall. They will face Minnesota in a rematch of last year’s championship, after the Lynx completed a sweep of Washington earlier Sunday.

“We know that there’s a lot of good teams in this league, so to be one of the final two standing, we feel like we’re worthy of that, but we also feel fortunate to have the opportunity to go play,” Sparks coach Brian Agler said.

Diana Taurasi had tied the game at 87 with a 3-pointer from the wing with 10.8 seconds left.

After a timeout, Parker scored the go-ahead basket.

Taurasi’s 22 points led the Mercury while Griner added 18. Griner made just 7 of 23 shots for the game.

“Tough day for me,” she said. “We kept getting good looks, I just wasn’t finishing them.”

Leilani Mitchell’s steal and layup with 1:21 left brought the crowd to its feet and cut the Sparks’ lead to 85-82. Then Camille Little, who scored 18 points, stole an inbounds pass and drove for a layup to make the score 85-84 with 18.6 seconds to go.

Sims sank a pair of free throws with 14.1 seconds left before Taurasi’s shot tied it.

The Sparks won all six meetings regular season and postseason, with the Mercury.

“Look, they’re defending champs for a reason,” Taurasi said. “They make you pay anytime you make a mistake. That’s the quality of players they have on that team right now.”

The Sparks trailed by as many as 11 points in the first quarter after Little’s 3 with 3:43 left, part of her 12 points in the opening 10 minutes.

The Mercury’s 30-21 lead in the second quarter disappeared with a pair of Parker steals, two free throws and a nifty assist to Sims for a layup, and Los Angeles took its largest lead of the half, 43-35, on Alana Beard’s jumper 36.3 seconds before halftime.

“I just take what the defense gives us,” Sims said. “Every game we executed a little bit more.”

The Mercury’s top two players, Taurasi and Griner, combined to make only 3 of 19 shots in the first half as Phoenix scored only 13 second-quarter points.

Griner, at one point late in the third quarter, grabbed Parker in frustration for what she thought was a foul, and Mercury head coach Sandy Brondello was given technical. Taurasi was whistled for a technical seconds later.

Taurasi asked Brondello how she felt about the Mercury shooting only three free throws in the last three quarters at home.

“I wish I could tell you the answer to that one,” Brondello said. “I know BG (Griner) got beaten up a lot. It is what it is. We’re not going to look back now.”

Stephen Colbert’s Hits & Misses: 2017 Emmys Host Gets Naked, Takes on Trump & Pokes Fun at the Pomp in a Show Meant for a Certain Crowd