Who else besides Stephen Colbert would’ve been the right choice to host the 2017 Emmys?

Even before the Late Show host surged to the top of the late-night talk ratings, fueled by his unabashed take-downs of whatever it was the Trump administration had got up to that day, the Academy and CBS had handed him the keys to TV’s biggest night and told him to get ready to drive.

Colbert couldn’t even accept the honor without taking a dig at President Donald Trump‘s inflated inauguration day crowd estimate—nor could he kick off the 69th Primetime Emmy Awards without acknowledging the elephant in the room, “the biggest TV star of the last year,” as he put it Sunday.

Actually, he couldn’t even go to sleep the night before the Emmys without a quick tone-setter. On Saturday evening he posted a “hot leak” from the trip to Russia he made for the Late Show in which he polled people on the street for their pick for best show. The Americans (which is about Russian spies, ha!) was the unanimous choice, a shoo-in to win “best show” according to…The Russians.

“Yes, The Americans is not even nominated this year, but the Russians have rigged bigger elections than this,” the clip concluded.

Not exactly a wheel-reinventer (maybe it would’ve worked better if The Americans was really up for Best Drama this year), but it certainly was an indicator that Colbert had no intention of putting politics aside for the night.

We won’t know until tomorrow whether Colbert and this year’s crop of nominees—which were some of the the most talked about shows and performances in recent memory—were enough to raise the Emmys from the ratings doldrums, or at least improve upon 2016’s least watched telecast ever, but inside Los Angeles’ Microsoft Theater at least…

Colbert was preaching to the choir.

“Why didn’t you give him an Emmy?!” he lamented to the audience, referring to President Donald Trump‘s missed opportunities for Celebrity Apprentice. “I tell you this, if he had won an Emmy, I bet he wouldn’t have run for president. So in a way, this is all your fault!”

Though reminiscent of Jimmy Kimmel blaming Apprentice producer Mark Burnett for Trump at last year’s Emmys, the stakes have, of course, been raised since, and it helped punctuate an uneven monologue that—much like the Late Show—really got going once he had doled out the requisite wink-winks at award shows and showbiz and switched to politics.

“Should’ve gotten it,” he noted one more time. “But he didn’t. Because unlike the presidency, Emmys go to the winner of the popular vote. Where do I find the courage to tell that joke in this room?!”

Meanwhile, the traditional monologue came after the requisite savvy song-and-dance number—and savvy it was, complete with Handmaids doing the Charleston and shout-outs to current events. The refrain was “everything looks better on TV!” and was an efficient, upbeat way of acknowledging why a mode of escape is so important, even if it’s an escape into another world that makes us grateful for the one we’ve got. Millie Bobby Brown, Julia Louis-Dreyfus and Tony Hale took part in character, while Grammy winner Chance the Rapper also popped up to rap about his love of the classics and, most poignantly, to wonder “I still think M*A*S*H rocks, but if Hawkeye can be a soldier why not Laverne Cox?”

Colbert also got some key assists from marble-mouthed Seth Meyers, the target of then-civilian Trump’s tweeted ire when he hosted the Emmys in 2014, and—thanks to a truly covert op—former White House press secretary Sean Spicer, who strolled out with a podium (much to the wide-eyed delight of his Emmy-winning SNL doppelganger Melissa McCarthy and the near apoplectic surprise of Anna Chlumsky) to insist tonight’s would be the “largest audience to witness an Emmys, period, both in person and around the world.”

See, who doesn’t want to rub elbows with the Hollywood elite when given the chance, really?

Among the non-political (albeit sociopolitical), expected monologue jokes about Hollywood—Millie Bobby Brown is proof there’s work for women over 12, the Emmys are a night when the stars come together to binge on themselves, etc.—Colbert’s sharpest barb was reserved for Bill Maher.

Saluting the Academy for honoring the most diverse group of nominees in Emmys history, he continued, “And there’s so many talented African-American nominees. Jeffrey Wright, Viola Davis, Samira Wiley, Uzo Aduba, Anthony Anderson from ABC’s black-ish. And, of course, Bill Maher.”

That punchline was perfection, though actually dampened a bit when he proceeded to explain the joke—Maher infamously used the N-word when cracking a joke on an episode of Real Time earlier this year. He apologized, but still seemed a little defensive that he was being raked across such hot coals over an obvious joke. (Dude, people knew it was a joke. That wasn’t the point.)

Alas, Maher—whose return to the Outstanding Variety Talk Series race this year annoyed plenty of people for mainly this very reason—was not in attendance. 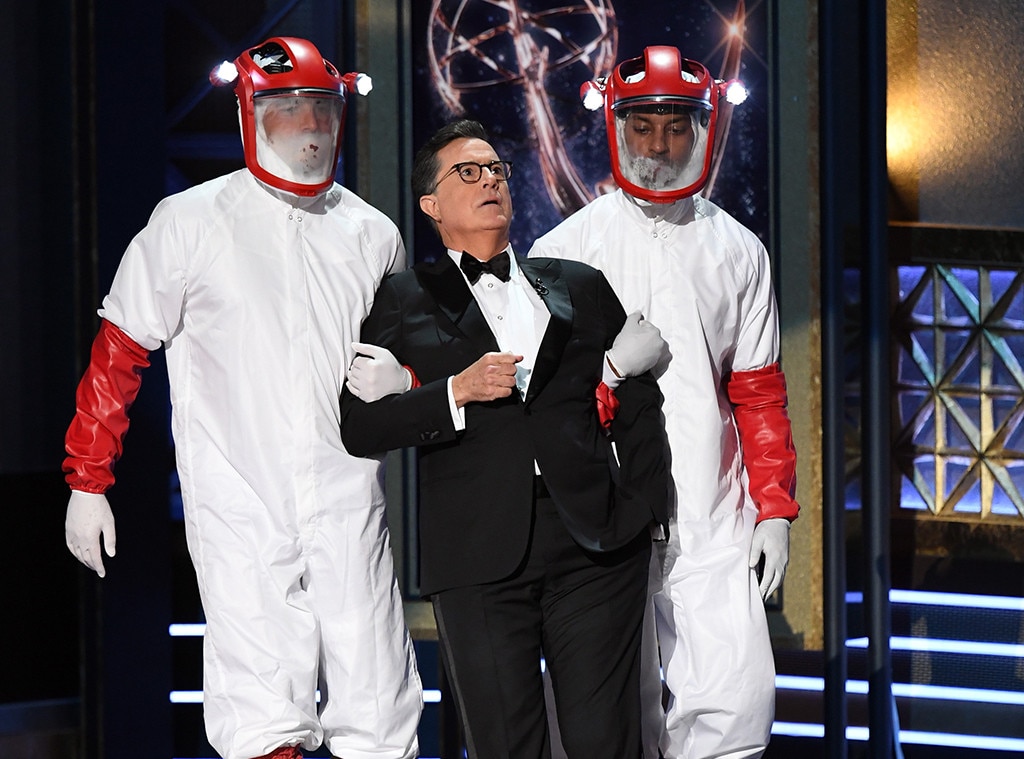 The next pre-taped bit, in which Colbert was spirited away to a Westworld diagnostic center because he was “glitching,” made for another funny yet highbrow bit that prestige-TV viewers of the HBO drama (which entered the race this year with 22 nominations, tied for the most with Saturday Night Live) would find funniest.

But in case you don’t watch Westworld and aren’t familiar with Jeffrey Wright’s sinister robot programmer Dr. Ford, Colbert was butt-naked for the sketch, and nudity—particularly men’s bare butts—is funny no matter what.

Colbert warned ahead of time in interviews that he’d been told he couldn’t bare his tush on the Emmys, but a little bit of blurring seems to have appeased the CBS censors.

“Have you ever questioned the nature of your reality?” Wright asks him. “Every day since Nov. 8,” the host replies.

“Lower politics level,” Wright replies, prompting an insider smile from Colbert as he proceeds to literally turn down the politics level.

And that apparently worked, because, one, there just wasn’t time for more politics, and two, the stars took it from there. The current political climate rippled like an undercurrent throughout the show, as was expected, and both presenters and winners got into the act, whether with bold statements like Lily Tomlin and Jane Fonda‘s pronouncements about refusing to be “controlled by a sexist, egotistical, lying, hypocritical bigot” or more implicit statements, such as The Handmaid Tale creator Bruce Miller‘s entreaty to “go home, get to work, we have a lot of things to fight for.”

Colbert’s “first-ever interview with Emmy,” co-starring Laverne Cox as the statuette herself, was reliably cute. The jokes about Oscar not being a trustworthy guy to date because he’s “naked and holding a sword” and Tony being no good because his husband gets “so damn jealous” were pretty adorable, if also on the insidery side.

But perhaps that’s just how award shows are, and will be so increasingly on the TV side especially as viewership splinters further into broadcast, cable, premium cable, streaming and cord-cutting factions, a sprawling Venn diagram whose common space is getting ever smaller.

Of course, that’s why Colbert paused for the “traditional Hollywood prayer” at one point: “Lord, thank you for giving us talent and beauty and that gaping hole inside of each of us that craves love and will never be filled. Amen.” 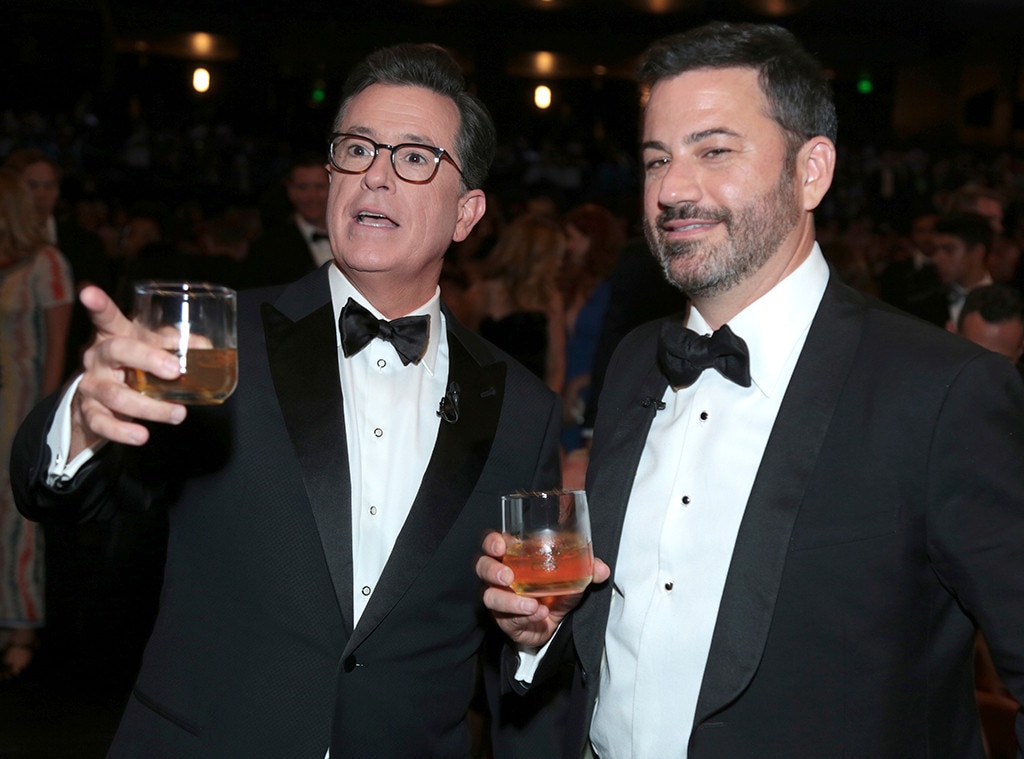 The funniest post-monologue joke was a presumably planned yet left-to-chance riff between Colbert and Jimmy Kimmel after finding out for sure that they’d lost to Last Week Tonight With John Oliver in the Best Variety Talk Series category, the HBO show’s second straight win.

The show came back from a commercial break to find the two of them having the evening’s specialty cocktail, The Last Week Tonight.

“It’s a dry, British cocktail,” observed Kimmel. “Yes,” Colbert added, “it’s really good. It’s so high quality, apparently they can only make one a week. “Mine has extra bitters in it,” Kimmel said. “You know, sometimes they put the wrong name on the envelope and,” he added hopefully, “it’s possible that that happened here, right?”

“Not tonight,” Colbert assured him.

Multiple inside jokes in one, about what it’s like to host a late-night show four whole nights a week, and about the biggest screw-up in Oscar history, which happened on Kimmel’s watch just months ago.

All very amusing, if you live and breathe Hollywood and its antics.

Which everyone in the room tonight does, so Colbert did his job gamely and intelligently, even—and most importantly—miraculously wrapping the show up on time. He might not have brought anyone new to the table, but all the guests who arrived, familiar with the menu and ready to feast, were treated to a satisfying meal.

Jim Carrey Is Returning to TV for the...

Inside Janet Jackson's New Life as a Single...

Elisabeth Moss Wins Her First Emmy for The...