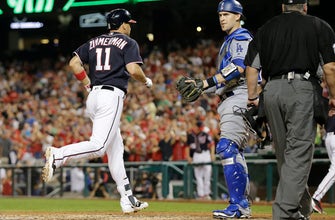 Strasburg (14-4) allowed a run in the second inning on Logan Forsythe’s double, the first against the right-hander since Aug. 19. He struck out eight and combined with three relievers to toss a five-hitter.

The Nationals avoided a three-game sweep against the NL front-runners. Washington’s slumbering offense came alive on Zimmerman’s three-run shot in the sixth off reliever Ross Stripling (3-5). Zimmerman and pinch-hitter Adam Lind homered in the eighth.

Los Angeles lost 11 in a row and 16 of 17 before ripping off four consecutive wins, including the first two games this series. The Dodgers magic number to clinch the NL West dropped to four when second-place Arizona lost at San Francisco.

Anthony Rendon hit an RBI double in the seventh for Washington, which had lost four of five.

Zimmerman’s solo homer in the eighth matched his career high of 33.

The Dodgers ended the series six games ahead of Washington in the race to secure home-field advantage throughout the NL playoffs.

Strasburg had two outs in the second before the streak ended. With Yasiel Puig on third base, Forsythe hit a drive deep to left-center field. Michael Taylor raced into the gap, caught up with the flight path and put his glove on the ball, but couldn’t catch it. Puig easily scored for a 1-0 lead.

During the streak, Strasburg allowed 19 hits, walked five and had 42 strikeouts.

Washington scored only two earned runs over the first 23 innings of the series. The Nationals topped that in the sixth. Following a walk and single against Stripling, Zimmerman powered a drive deep to center field for a 3-1 lead.

Nationals: OF Bryce Harper took batting practice outdoors for the first time since hyperextending his left knee on Aug. 12. The slugger impressed with his power display. The timeline for his return remains unclear, but he’s hoping to be back when Washington begins play in the NLDS on Oct. 6. ”I hope so. That’s definitely in my head,” Harper said of a return goal. ”That’s what I want to do. That’s where I want to be. But it takes time.”

Did Nicole Kidman Wear Mismatched Shoes to the 2017 Emmys?

How to respond to a negative Glassdoor review